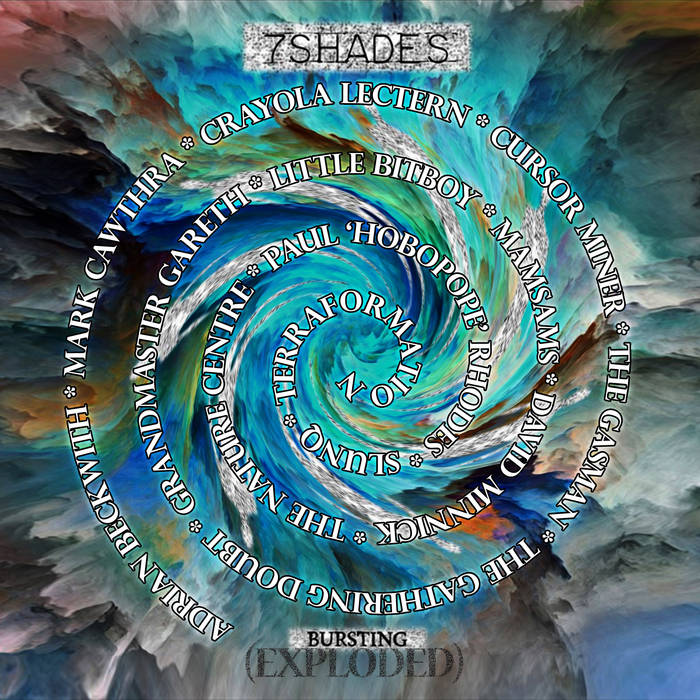 Back in July, 7shades released their second album – ‘Bursting’ – which, predictably, has almost entirely failed to enter the psyche of anyone in the press, radio, blogsphere or ‘music business’ in general (with the notable exception of this rather fine review from The Progressive Aspect)

Nevertheless, the people that really matter (ie those that actually pay for it) have been saying some very nice things, and some of the people who actually helped to inspire it have been too, which is, frankly, about as fucking good as it gets. You can read some of those kind words here, if you’re actually bothered what other people think

So anyway, it’s no secret that here in 7shades secret mountain hideaway we have a great and profound love for Mr Tim Smith and all things Cardiacs, and so we were once again mulling on an appropriately awesome way to try and raise some money for him, as his hands are (still) cunts, and his ongoing medical expenses are (still) astronomical.

Obviously, the aim was to do something that would appeal to those Cardiacs fans who might not otherwise buy our music – for that is many, like bloody thousands actually – and so we hit on the bright idea of putting together a stellar and incredibly diverse lineup of Cardiacs-loving artistes to remix their favourite tracks from our album. The end result would then be released digitally via Bandcamp, and 100% of all profits from this would go directly to yer man with the cunty hands.

We’ve been keeping pretty quiet about this for the last few months, as the mixes have been coming in (which has been kinda difficult actually, given how excited we are about it), but I think it’s fair to say that the end results have far surpassed our expectations. A ridiculously brilliant selection of remixes, in the widest variety of styles, from fairly traditional interpretations to completely out there reconstructions, and just about everything in between.

This must surely be considered an ‘essential purchase’ for any fan of Cardiacs-related music, or indeed for anyone who wants a nice way to bung a bit of money Tim’s way, whilst getting some stonking music in return. It will be released on Bandcamp for the princely sum of TEN POUNDS, but as always with Bandcamp if you choose to pay more you are very welcome to do so, and rest assured all of your filthy luchre will get transferred directly to the leader of the starry skies.

YOU ARE ADVISED TO LISTEN TO THIS ALBUM IN RANDOM PLAY ('COS THAT'S HOW I WORKED OUT THE RUNNING ORDER).